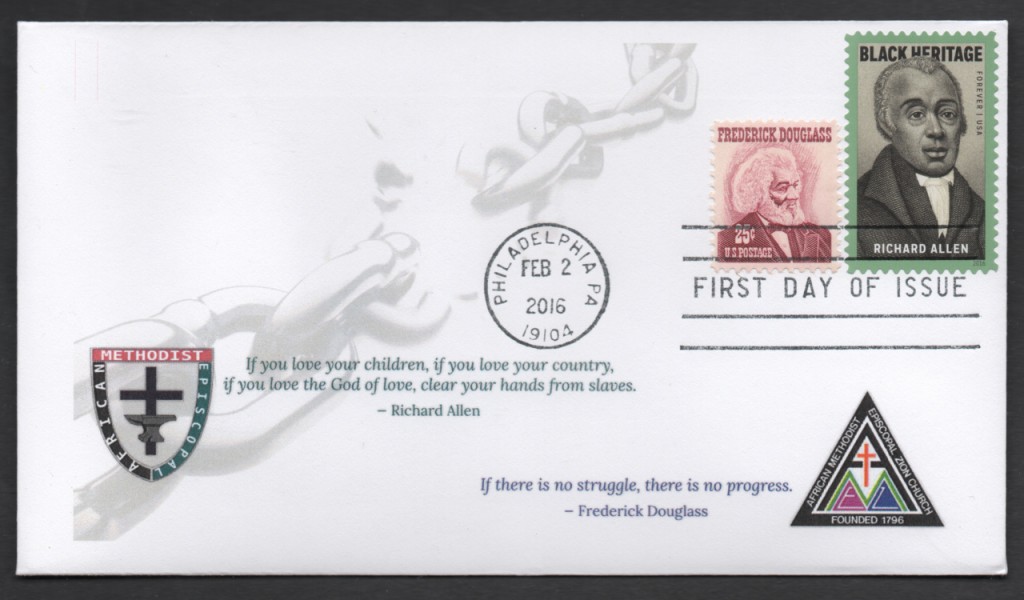 Richard Allen, born 16 years before the American Revolution, grew to become one of America's most influential and inspirational black leaders. After teaching himself to read and write, he spent his life improving literacy in the black community and organizing political strategies for the abolition of slavery. At age 34, he founded the African Methodist Episcopal Church, the first independent black denomination in the United States, and was elected its first bishop. The 39th stamp in the USPS Black Heritage series commemorates his life and achievements.

Reverend Allen would not live to see the abolition of slavery, but when he was 58 years old, Frederick Augustus Washington Bailey was born in Maryland. Frederick, who would later change his surname to Douglass, was also self-taught in reading and writing, and he, like Richard Allen, grew to be a remarkable orator, an ambitious social reformer, and a preacher in the African Methodist Episcopal Zion Church (a different denomination with a similar name to that of Reverend Allen). Frederick Douglass fought for the abolition of slavery in the United States and was an early advocate for other progressive causes, including women's suffrage and desegregation. He stressed the distinction between the "Christianity of Christ" and the "Christianity of America", considering Christians who used the teachings of Christ to support oppression to be wicked and immoral wolves in sheep's clothing.

Rev. Douglass did live to see the end of slavery in the United States: the Emancipation Proclamation took effect when he was 44. Fourteen years later, he returned to the plantation of Thomas Auld, the man who had claimed ownership of Douglass as a young man. In Douglass' youth, Auld had sent him to be beaten and whipped; with Auld on his deathbed, in an act of grace, Douglass reconciled with his former master.

For these covers, I paired the 2016 Richard Allen stamp with the 25¢ Frederick Douglass stamp (Scott #1290) from the Prominent Americans series. The covers bear an image of a chain being broken, and a quote from each of the two men, alongside the symbol of their religious denominations.