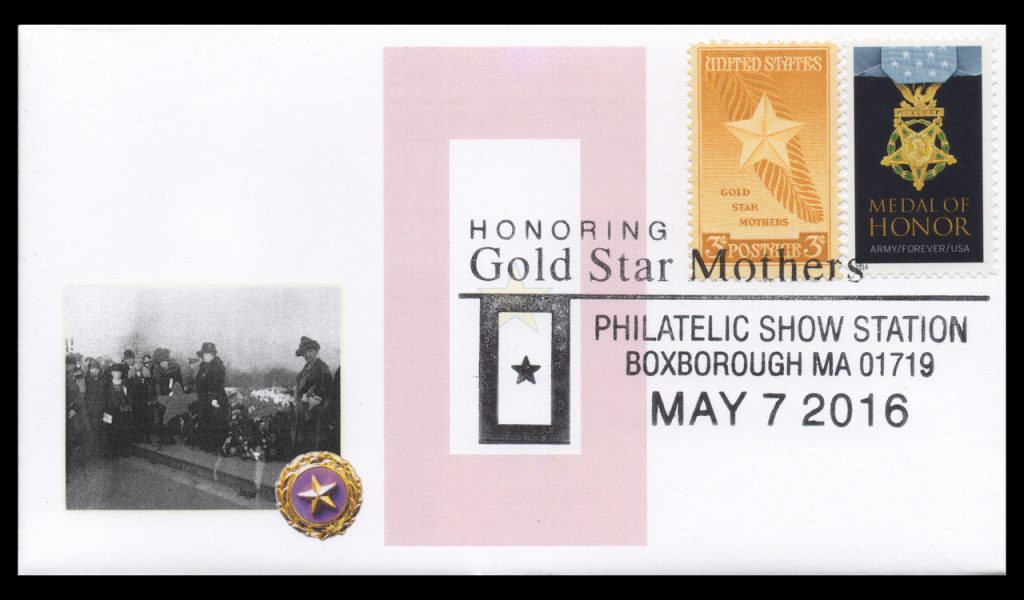 The name of the Gold Star Mothers Club comes from the custom of families in the United States hanging a Service Flag in a window of their home during times of war. Each banner would be adorned with a star for each family member in the Armed Forces: living servicemen were represented by blue stars, while servicemen who had been killed in action were represented by gold stars. Thus, Gold Star Mothers were the mothers of children who had been killed in combat.

The national organization, called American Gold Star Mothers, Inc., was formed in 1928, and today membership is open to any American woman whose child has died in the line of duty in the U.S. military. On May 7, 2016, the Philatelic Show in Boxborough, Massachusetts offered a pictorial postmark reading "Honoring Gold Star Mothers" and depicting a Service Flag with a single star.

For this cover, I used a scan of a 1925 photo (held in the collection of the Library of Congress) taken at the Tomb of the Unknowns at Arlington National Cemetery. In the photo, Gold Star Mothers pay tribute to U.S. servicemen who had lost their lives in combat. I gave the black-and-white photo a gold shadow and overlaid the official military pin, in gold and purple, for the Gold Star Mothers. A red Service Flag with a single gold star is centered on the cover. The 2014 United States Army Medal of Honor stamp (Scott #4822a) and the 1948 Gold Star Mothers stamp (Scott #969) pay postage. The cover is canceled with the "Honoring Gold Star Mothers" pictorial postmark from Boxborough, MA dated May 7, 2016.