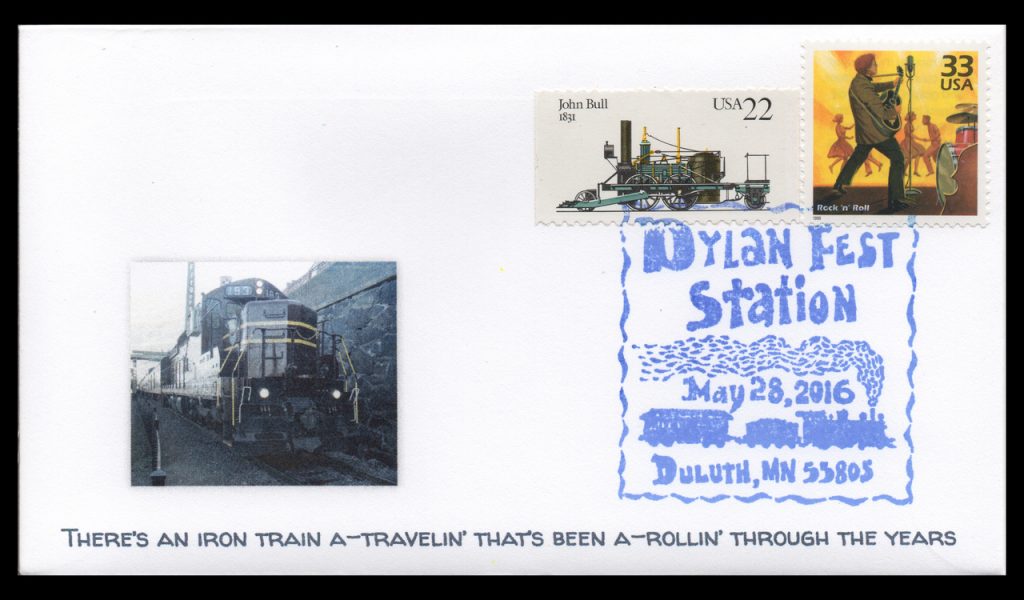 The Blood on the Tracks Express is a rolling music festival from Duluth, Minnesota to Two Harbors, Minnesota — and back — in honor of legendary artist Bob Dylan. Oxford professor Christopher Ricks puts Bob Dylan's lyrics in the same echelon as Milton, Keats, and Tennyson, and his music and lyrics have left an indelible mark on American music and culture for over half a century. In 2016, The Dylan Fest (incorporating the The Blood on the Tracks Express ride) offered a pictorial postmark, four days after Dylan's 75th birthday.

For these covers, I honored Bob Dylan with a railroad theme. I began with the opening line from his Train A-Travelin', a song that uses the imagery of an iron train "with a firebox of hatred and a furnace full of fears" that we must collectively stop. The line — "There’s an iron train a-travelin’ that’s been a-rollin’ through the years" — lies across the bottom of the cover. I processed an image of a train so that it appeared to be made of beaten cast iron, and set it atop a shadow in the lower-left.

For postage, I used a booklet single of the iron John Bull locomotive from 1831 (Scott #2364) and the "Rock 'n Roll" stamp from the Celebrate the Century 1950s sheet (Scott #3187m). They are cancelled with a strike of the "Dylan Fest Station" pictorial postmark in blue ink, picturing a rolling train, from Duluth, Minnesota dated May 28, 2016.